Today I thought that I would ramble on. Let thoughts come as they may. Rambling is somewhat like wandering.

I knew a Jesuit priest who taught business at Dayton University. He taught management by wandering around. Instead of just sitting in an office reading reports, statistics, and attending meetings, he advised executives and CEO’s to wander the halls of the company and engage in 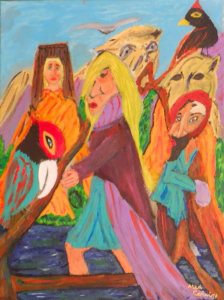 conversation with the employees. Stop and talk with janitor. See how he was doing, etc. By wandering and rambling around one could experience more truly the emotional and functional reality of the company and thus make valuable adjustments.

In Norse mythology, Odin took things a bit further. He would disguise himself as an undistinguished wanderer and travel through the domain of men without disclosing his true identity. Thus he could discover people as they really were.

The Romans equated Odin with Mercury, the god of communication. Perhaps an association could also be made with Chiron, the wounded healer, for Odin subjected himself to much suffering in order to gain wisdom.

Routine and goals are good. But aimless wandering is also good. It frees one to explore – to be like the wind and water and discover the nooks and crannies of existence where new revelations lie.

I have participated in discussions with a group of people named the Oracles. We meet and engage the I Ching or various decks of the Tarot, seeking through randomness to open a window for the guidance of Spirit.

In one card from a deck based on the Ramayana, we encountered a card where a man had a monkey on his back. Perhaps there was some association with Hanuman. In any case, the meaning that I got was that at times one must liberate oneself from compulsive routines and “shoulds.” Do something fun, out of the ordinary. Go on a road trip with no destination. Ramble, wander.

I remember back in the early seventies during my hitchhiking days I was headed south on I 5 returning from visiting a friend and attending a wedding in Portland. I intended to go to Salem, Oregon to pick raspberries in order to make a little cash. I got dropped off at an exit south of Portland with little traffic. It was at a juncture of two freeways: I 5 going north-south, and another freeway that went east-west along the Columbia river.

After an extended period of sticking my thumb out with no result, I 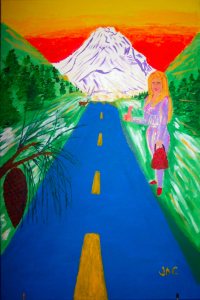 decided to let go of my intention to get a ride to Salem. Instead I would accept a ride from whatever car first stopped and go wherever they were going.

Almost immediately, a car stopped heading east along the Columbia. They took me to the Dalles, and I had four days of adventure. When I first got there I was invited to a Christian revival. I found a cherry orchard where I camped with a bunch of young hippies and spent the night around the campfire discussing eastern religions. Then, I spent the next three days picking cherries which Chicanos.

One elderly man amazed me. He was the king of cherry picking. He had a chauffer who drove him to the orchard in the morning in a Cadillac and he could pick more flats of cherries in a day, in perfect condition, than all the rest of us combined. We all treated him with deference. In the few days I was there, he made over a thousand dollars.

Working as diligently as I could, I made about thirty dollars. But thirty dollars was all that I needed. I was spiritually, emotionally, and physically refreshed; I had money in my pocket. Rambling well rewarded.  And now I have rambled on long enough.