Hallowed Be Thy Name

Does God have a name? I think of God as the source of all that is — the One from which the many have come. As it says in the Tao, from the one came two and from the two came three, and from the three came the ten thousand things.

If God is the original One, then as far as I know, God has no name.

I’m using the word God to write about something that can’t really be defined in any human language because the original being is beyond time and space and therefore beyond all concepts. I am going to try to do so, using English (because that is my native tongue), even though it is impossible and will result only in linguistic nonsense.

It is possible that at some point beyond time and space God was not conscious. What the nature of God was in such a state is knowable only through direct experience. It is not comprehensible nor expressible but the experience can be approached through the imagination.

When God became conscious it was what we would call in English an “I Am” experience. God’s awareness of himself was the first duality, the knowing subject and the known object.

It was also the emergence of the first trinity: the knowing subject, the known object and the composite unified Self from which consciousness arose. As humans who reflect the nature of God we experience this on a personal level as me, myself, and I.

When God manifested these energies they emerged as vibrational frequencies. In the various realities that we experience as human beings we can think of these as life, love, thought, light, sound, etc.

Within God these vibrational frequencies emerged from one center in a harmonious spectrum of mathematically perfect relationships. In terms of music all sounds come from one universal tone and all tones resolve back into that one resonant vibration which is the source and sum of them all. The Alpha and the Omega. If we think of light, reality is an interplay between light and darkness. All colors are refracted from light energy and recombine into these primary radicals.

Moses and the Burning Bush by Marc Chagall

As long as we think of God as All One, then there is no name. God is simply the primary “I Am.” That is why the Bible says that when Moses asked what God he should say sent him, God said simply, “tell them that I Am sent you.”

If we examine the many names of God in many different languages, we will see that most of these describe attributes of God or names that people have given to identify their apprehension of the divine. 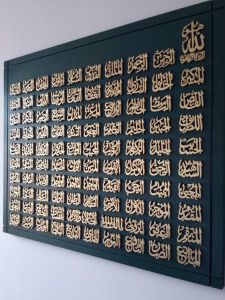 99 Names of God in Arabic

When I emerged from my mother’s womb, I was not aware that I had a name. I simply was. My parents gave me a name. Similarly, God is aware of his existence. Human beings who have experienced God have given him names. The various names are used to try to identify what it is that they are talking about. Naming things is one of the qualities that with which human beings are endowed. Because we  name things we have developed language in order to communicate with one another.

For instance, Islam has 99 names of God which describe various attributes of God plus the one primary name Allah that simply means the God.

One of the names Judaism used to God as El Shaddai, meaning “god of the mountain” or “most high god.” Another term used to identify God was Adonai, meaning Lord. And then there is the tetragrammaton יהוה (English: YHWH), which no devout Jew has pronounced for over 2000 years. It is not even sounded within the mind. While Christian scholars argue over the pronunciation, Jewish scholars say that the original sound which was once known is now lost.

I encourage everyone to explore the Chinese and Hindu names of God as well. I’m not going to do so now because I want to follow another tangent that leads to identification of the Name of God with the Word of God or the Sound of God.

In various cultures, mystics who practice the science of sacred sound attest that they are elevated into the presence of the divine by chanting or singing a sacred syllable. For example, many Hindus experience this through Om or Aum. Sufi orders who practice dhikr experience union with God through the singing of Hu. Both claim that these sacred sounds are the original sound from which all vibrations emanate and that they are both the Word of God and the Name of God.

It is interesting that Eban Alexander, in his recent book Proof of Heaven, wrote that when he experienced heaven while brain-dead for seven days, he associated the experience of God in the highest heaven with the sound Om.

I am not going to offer and opinion on this. I like both Om and Hu. I encourage you to try them both with like-minded friends.

Hallowed Be Thy Name

So, when Jesus taught his disciples to pray “Hallowed be thy name,” what did he mean? Given the context within which he spoke, I assume he was referring to the sacred tetragrammaton that could not be pronounced, though I believe that Jesus himself, having ascended to the highest heaven, may have been familiar with the sound.

For all of us who love the potency of the Lord’s Prayer, I feel that on a personal level you may choose the Name that resonates most vibrantly with you and most effectively empowers you to experience the presence of the One Divine, Most-high, Compassionate and Loving Source of All. There is only one God. There is no God, but God.

If you enter into communion with God, as Moses did, and you feel a need to ask for a name, then ask and you will receive.

3 responses to “Hallowed Be Thy Name”